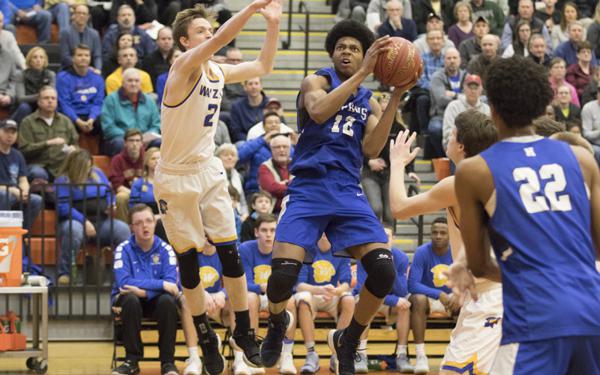 Kerwin Walton, a 6-foot-4 senior guard from Minnetonka (MN) Hopkins, is ranked as state’s number three player in the Class of 2020 and one of the country’s top outside shooters. Walton scored 32 points Saturday in the Royals’ 85-70 opening loss to Park Center in the Breakdown Big 12 Classic.

Kerwin Walton, a 6-foot-4 senior guard from Minnetonka (MN) Hopkins, is ranked as state’s number three player in the Class of 2020 and one of the country’s top outside shooters.

Walton averaged 16.7 points per game for the Royals last season, who won the Class AAAA state title in March. He missed their season-opening 74-65 loss to East Ridge, but Walton scored in double figures in every game but one and had seven games of 20 or more points, with a season-high 25 points versus Minnehaha Academy and also against Wayzata in the Section 6AAAA section finals.

Gopher Hole caught up with Walton at the Breakdown Big 12 Classic to learn the latest on his recruitment and senior season.

Gopher Hole: Season opener. You obviously play a very good team, a team that was in the state tournament. Do you like playing these tough games to get you ready for the regular season?

Kerwin Walton: I mean, definitely. It is the best preparation for us coming into the state tournament, because March is most important, not matter how the regular season goes, so being able to play good team right off the bat, definitely is going to help us in the long run.

Gopher Hole: I remember last year, you were injured in the opener and you guys lost and went on to win the state title, so it just goes to show that a tough loss early doesn’t really mean all that much.

Kerwin Walton: I mean, yeah. All it does is just give us a lot of things to learn, because we are the type of team that will get better as the season goes on, so it’s not really that big of a deal.

Gopher Hole: A little different look for Hopkins. You lost Zeke Nnaji (who is now at Arizona) and some other key players to graduation. How does your role change with all the players that?

Kerwin Walton: Really, I am going to have to lead these guys. Being able to talk to them a lot. Run the show and just direct everything.

Gopher Hole: Do you kind of like that being a little bit more of a leader this year?

Gopher Hole: How about your recruitment? You decided not to sign in the fall. Was that something you had planned for awhile or did it just kind of happen?

Kerwin Walton: I planned to sign late from the beginning. I saw a lot of guys signed early, but me and my family choose to sign late.

Kerwin Walton: In a way, because signing early, has its perks. The coaches get to come whenever they want and see you play. Coaches know that you are guaranteed to be there. It is pretty good to watch them sign, but I decided to go my own way.

Gopher Hole: Does it kind of give you a chance to watch those teams a little bit more, the schools that you are looking and watch them during the season to see how you fit in, even better?

Kerwin Walton: Oh, yeah, because it helps me understand how they play and how I would fit into the role.

Gopher Hole: How many officials have you taken so far?

Gopher Hole: Where all did you go?

Gopher Hole: What do you learn from those experiences, making the official visits?

Kerwin Walton: I get to check out the environment, the campus and the overall culture on the basketball team. I get to talk to the players. Who’s returning and who’s not? You get to establish a better relationship with all the coaches. I get to watch practice. It is really just a great experience for me, because I get to see how I can fit into the system and the role and how I can fit into the playing style of the team.

Gopher Hole: Do you gain a lot from that experience?

Kerwin Walton: Definitely. It definitely sheds a lot of light on a lot of different things. I can ask as many questions as I need to and they will answer it, truthfully and it is really a great experience to get to gauge where I should go

Gopher Hole: I think that I read that you have 23 offers. Does that sound right? Do you even keep track anymore?

Kerwin Walton: I don’t even know.

Gopher Hole: Are you down to a list of a certain number of schools?

Kerwin Walton: Definitely. I have a small list of schools that I am heavily interested in and still show heavy interest in me.

Gopher Hole: Pretty much those five plus a few others, then?

Gopher Hole: What about the homestate school, Minnesota. What are you hearing from the Gophers?

Gopher Hole: What would it maybe mean to have a chance to play for the homestate school?

Kerwin Walton: I think it would be great, just because a lot of friends and family could come and watch the games. I would be like the “hometown guy” and get a lot of praise from the fans, so it does have its perks.

Gopher Hole: You had a really big summer and shot the ball extremely well and got some bigtime schools like North Carolina, schools that, to be honest, normally don’t recruit Minnesota kids. Does that make you feel pretty proud of how well you played this summer?

Kerwin Walton: Yes, because all this stems from the amount of work that I put in. I put in a lot of time in the gym and effort into being better and I have to get mentally prepared to shine on the big stage, so it helps me set off for my success going into college.

Gopher Hole: You had a couple of ridiculous games where you had multiple threes. Like going ten of 13. Obviously, there is good and bad about it, that the game has become more of a three-point game and even guys who shouldn’t shoot threes, are shooting them. Do you like that that is a skill that you have and it is super important because you are going to make a lot of those threes? Is that something that you like that the game has become even more outside based?

Kerwin Walton: Definitely, because shooters are very valued, no matter what level, whether it is high school, college or NBA. Having a shooter on the team is a necessary thing. I don’t know any person who wouldn’t want a shooter on their team, especially one who can shoot at a really high clip.

Gopher Hole: When do you think that you are going to try to decide on a school. Have you set a certain date or are you going to wait until April?

Kerwin Walton: I am trying to get maybe early December, but I haven’t set a specific date yet.

Kerwin Walton: Probably more Gopher games and neighboring spots or anywhere that is going to invite me to a game, because it will be a good experience. Watching on TV and watching it in person is a lot different, so definitely, it will be good.

Gopher Hole: Have you thought much about what you are going to try to major in at college?

Gopher Hole: A lot of those schools that you are looking into, to be honest, have good business programs. Is that nice to know that you are going to hopefully have a good basketball situation, but also a good educational situation?

Kerwin Walton: Definitely, but I think that most of the situations are involved with me, are great academic situations, especially in the business area, so it is not too big of an issue for me.

Gopher Hole: What is it going to mean to you the first time you walk onto your homecourt as a freshman?

Kerwin Walton: It will be great. Definitely, going to be good because it is a first experience, whether I am nervous or not, it doesn’t matter because I am going to be playing in a big arena, lots of people, it is going to be great feeling, regardless.
E

Didn't take an official. He's out guys. Plus UNC is on the list. That means no school and lots of money and perks.
S

Go Gophs said:
Didn't take an official. He's out guys. Plus UNC is on the list. That means no school and lots of money and perks.
Click to expand...

Yea not a good sign he didn’t take an official here.
G

To me, he shows the signs of a kid who wants to go to a school far away from Minnesota, but he would still be interested in attending some Gopher games for something to do. Maybe he also enjoys the extra attention he gets from fans when he is still uncommitted.
C

Go Gophs said:
Didn't take an official. He's out guys. Plus UNC is on the list. That means no school and lots of money and perks.
Click to expand...

I’m guessing he’s not a Plan A recruit for North Carolina. Plus they already have like 4 or 5 commits, not sure how many scholarships they have left.
D

Gopherlife said:
To me, he shows the signs of a kid who wants to go to a school far away from Minnesota, but he would still be interested in attending some Gopher games for something to do. Maybe he also enjoys the extra attention he gets from fans when he is still uncommitted.
Click to expand...

Come on guys! He essentially said, he plans on being a Gopher. ?

Well we should know in the next week or two if he is indeed sticking to his early December timeframe.

No official either shows we're not a priority or we're not in contention. Either way it's very unlikely he comes here.

As someone else said, I'm sure he's eating up the popularity and support that he's getting from local fans who want him to commit here. Too bad it looks like we're getting strung along similar to what Matthew Hurt and Dawson Garcia did.

Hopefully we can land a solid PF who actually wants to play here so we can finally fill the void at PF.
T

Im sure you've all noticed that comradery is a big thing with kids that age. I remember it well 50 years ago. Its still going on, and an example is the 3 kids that came together on the gophers of late. Peer pressure at its best!!
You must log in or register to reply here.
Share:
Facebook Twitter Reddit Pinterest Tumblr WhatsApp Email Link
Top Bottom