Gophers Travel From a Foggy Performance to Foggy Bottom

The Gophers (7-1) extended DC visit ends with a match-up versus Hall of Famer Jennifer Rizzotti’s George Washington University (6-3) squad. Rizzotti is in her 4th season with the Colonials after leaving Hartford for GW when George Tsipis moved on to Wisconsin. In her first season, GW were conference co-champs and made the WNIT. In Rizzotti’s second season, GW finished fifth; but won the conference tournament and earned the NCAA bid. Last season, the Colonials slumped to 10-20 (7-9 in the A10). That placed them in an eighth place tie with St. Joseph in the 14 team A10. This season GW was projected 7th finishing behind VCU, Dayton, Fordham, St. Louis, Davidson and George Mason. However, the Colonials head into the Minnesota game on a winning note.

Injuries have impacted what should’ve been a veteran led lineup. The Colonial’s core was to be grad transfers, Alexandra Maund and Ariel Stephanson, red shirt junior and Louisville transfer Sydney Zambrotta and junior forward, defensive specialist Neila Lama. Maund spent some time off with an ankle sprain suffered in the seasons second game and Stephanson has just returned from an ankle injury. Zambrotta, who started the season as the offensive leader, has been benched by a stress fracture. Lama has been sidelined by a knee injury suffered in the Maryland loss. Rizzotti said she expects everyone to be back before the Colonials A10 opener. So the Gophers will likely see the freshman lineup.

With the injuries, Jennifer Rizzotti has gone younger. Red shirt freshman, Tori Hyduke, who sat out last season with an injury, and freshman Faith Blethen have stepped up. The season’s low point had to be the home opener (GW’s second game) against Princeton. The Tigers shut down the Colonial offense and emerged with a 75-50 win. Three games later GW dropped a 88-54 contest at Maryland. Then things turned around and George Washington has won four straight defeating Georgetown, Coppin State, Delaware and Quinnipiac.

In Saturday afternoon's 78-67 win versus Quinnipiac, GW placed five players in double figures and were led again by freshman Tori Hyduke with 22 points. Fellow freshmen Taiwo Mayowa (12 points and 11 rebounds) and Faith Blethen (12 points, 5 rebounds and 4 assists) played key roles. It helped that early in the second half GW held the Bobcats without a field goal for 9:27 minutes. George Washington enters their first game against the Gophers, young; but on a roll.

Note: Rizzotti was named an assistant coach on the US National team for the 2020 Olympics.

Note: Ariel Stephanson, the Wake Forest grad transfer, played against the Gophers in 2017 when Minnesota defeated Wake 93-81 in Las Vegas. Stephanson led the Demon Deacons with 20 points. Gadiva Hubbard, led all scorers with 25. Stephanson (Prince George) and Hubbard (Virginia Beach) are both from the Tidewater region.

History of The George Washington University:

In 1819, the Reverend Luther Rice, Obadiah B. Brown, Spencer H. Cone, and Enoch Reynolds (all Baptist ministers) set in motion the reality of a college in the District. These men raised the needed funds to purchase land in the nation's capital, petitioned the Congress for a charter, and began organizing a college. On February 9, 1821, President James Monroe signed the Act of Congress which created the College [Columbian College].

The Civil War split the College as it did the nation. When the conflict began, most of the students left their classrooms to join the Southern forces. The faculty as well was split by their opposing loyalties. Dr. A.Y.P. Garnett, Professor of Anatomy since 1854, departed for the South, where he served as physician to Jefferson Davis, president of the Confederacy. Dr. Robert King Stone remained to become the personal physician to Abraham Lincoln.

In 1904, Columbian University became The George Washington University by an Act of Congress. University President Charles H. Stockton provided guidance, reorganizing the University in 1911 to reduce expenditures and selling property to increase revenue.

The George Washington University the more complex history:
https://www.gwhatchet.com/2018/02/25/coming-to-terms-with-slavery-and-segregation-at-gw/
I 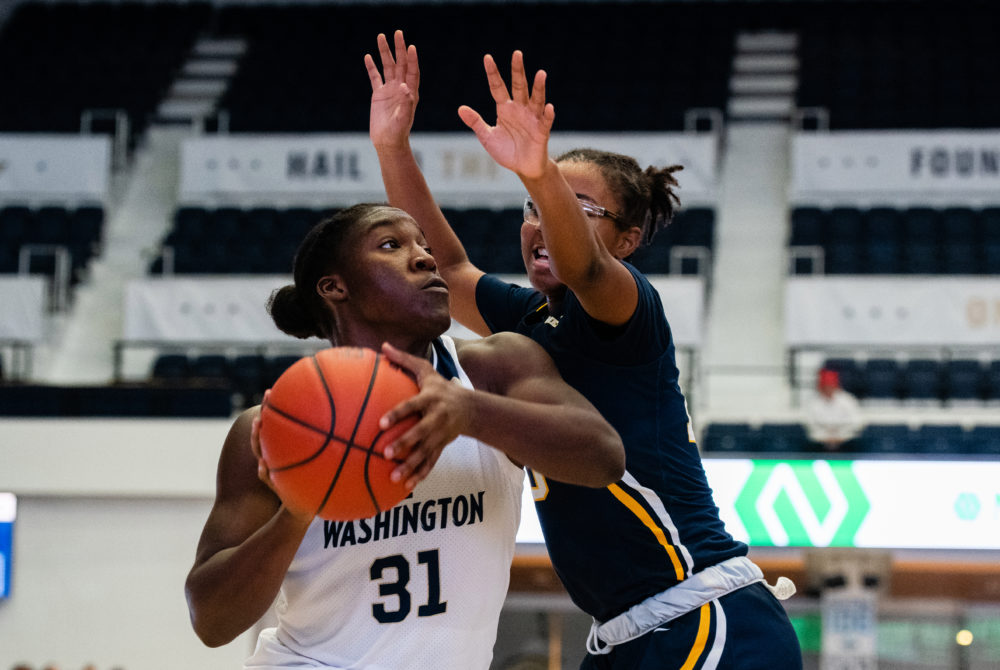 GW bounced back from a seven-point deficit in the first quarter to outscore Quinnipiac in the remaining three frames to secure its sixth win of the season.

Some notes from the GW win versus Quinnipiac:

“Tori and Mayowa have both settled in really nicely and played better and better every game,” Rizzotti said. “And having Alex Maund come back was a big boost for us in these last two games because it added that depth at the post and some senior leadership and maturity.”
Click to expand...

Rizzotti said the young core will grow their confidence levels as they continue to gain game experience.

“Starting three freshmen, sometimes it just takes some time to get a feel for our opponents,” Rizzotti said. “These are three guys that haven’t played in a college season yet. And so we might be able to show them a bunch of film, but until they’re out there physically, they’re not always comfortable.”
Click to expand...

The Colonials started the second half rejuvenated by their second quarter comeback.

“All of a sudden, the other team is exhausted trying to guard not just our starting five, but our second five as well,” Rizzotti said. “So our depth has definitely played a factor and being able to pull away in the last two games in the third quarter.”

“We were switching back between man and zone,” Rizzotti said. “I think that Quinnipiac does a great job with their motion offense, so we were trying to not let them be comfortable. And I think that helps that they weren’t really sure all the time what we are in.”
Click to expand...

Any of you tech savvy folks have a link for tonight's game ?
E

GringaGopher said:
Any of you tech savvy folks have a link for tonight's game ?
Click to expand...

On the Gopher app it shows ESPN.com, but not sure if you have to have some kind of subscription
W

EaganGopher22 said:
On the Gopher app it shows ESPN.com, but not sure if you have to have some kind of subscription
Click to expand...

Not the whole game, obviously, but the Gophers are posting some highlights on Twitter: https://twitter.com/GopherWBB

Might be the most complete half they've had all year, GW isnt great but the Gophers are clicking on all cylinders.
S

Sconiers is even getting playing time.
S

Powell losing defenders in the wake of her drive.

Win or Lose, WE DRINK!

Scalia is going to be such a nice player for us for 4 years, can't wait to see this team in 2-3years as Lindsay's recruits more of her players and develops them.
T

Nice to see Sconiers get some minutes and 7 points. I continue to love the first year guards. Scalia with 23 points, 7 boards, 4 steals, 2 blocks, 2 assists. Powell with 7 points and 6 assists. Pitts back to her normal self with 20 points and 7 assists. Diva with 10 points, 5 steals. T. Bello with 9 points, 8 boards. Might have been Gophers best game of the year. Nice way to cap a 3-game road trip. 2 more games at home before the start of the BIG. Gophers with a chance to finish NC play with 10-1 record. Too bad George Washington had two of its best players injured, however they did enter the game with a 4-game win streak.
S

Impressed by the freshmen guards in that they don’t play like freshmen, they seem confident when they are on the court, Powell can do some great passing and has good defense and speed. Scalia should help open up some space for Gadiva and Pitts. Back up posts will be the Achilles for this team, someone, anyone please step up, good to see Sconiers give it a go last night.
I


Quotes from the GW Hatchet:

“We were probably feeling a little good about ourselves after a four-game win streak,” head coach Jennifer Rizzotti said. “But I think today brought a few things into reality that we’ve been talking about, and against a really good team like Minnesota, those flaws are going to get exposed a little bit more than some of the teams we were playing lately.”
Click to expand...

“We were mainly focused on our defense,” Hyduke said. “I don’t remember how many points they scored in the half, it was probably close to 50. Our intensity just needed to be a lot higher and we needed to calm down on offense with the ball.”
Click to expand...

“There were multiple times in the first half where we were just getting stuck and just ended up turning over the ball because we didn’t know what to do with it,” Mokwuah said. “By picking up our intensity and just cutting hard for each other, we were able to make things easier and give up less turnovers.”
Click to expand...

“In the first half we didn’t really focus on the scout and the players that we were dealing with, so we gave them a lot of points that we definitely shouldn’t have given them,” Mokwuah said. “I think that’s one thing we have to focus on in the rest of the season.”
Click to expand...