Still no news if Destiny Pitts has transferred to another team?
S

hungan1 said:
Still no news if Destiny Pitts has transferred to another team?
Click to expand...

Well according to some she's being blackballed cause Whalen carries so much weight with all NCAA programs...

According to who?
M

Sorry, not to be a conspiracy theorist, because I know someone (in this thread?) was banging this drum.

But in reviewing the announcement from the NCAA about updating the transfer waiver guidelines ..... I did indeed see one of their highlighted criteria is with regards to disciplinary action on the previous team.

So it is plausible that while most other transfers could get waivers to be immediately eligible in 2020-21, those who did have discipline issues might be denied.
C

MplsGopher said:
Sorry, not to be a conspiracy theorist, because I know someone (in this thread?) was banging this drum.

But in reviewing the announcement from the NCAA about updating the transfer waiver guidelines ..... I did indeed see one of their highlighted criteria is with regards to disciplinary action on the previous team.

So it is plausible that while most other transfers could get waivers to be immediately eligible in 2020-21, those who did have discipline issues might be denied.
Click to expand...

Yeah, I was the one pointing that out earlier. If you go back a couple pages, you can find my diatribe on that subject.

The short version is that if they pass the proposed rule change (on May 20, I think) then no sit-out-year is the new norm. The academic sub-rule is required anyway, so the only gotcha-type sub-rule is the no disciplinary action rule.

So (1) no-wait would be the new norm, so any denial of the benefits of that new rule would constitute an explicit punishment by the NCAA for something that never had any review by NCAA staff. Should the NCAA be in the business of implementing punishment for alleged past crimes for which there was no hearing or investigation, and is basically none of their business?

(2) The facts will be out there for new prospective coaches to see, so if a coach fears future disciplinary or attitude issues, they can act accordingly. There shouldn’t be the extra burden of, “gee, I have to wait an extra year for this player to play.”

(3) The past is the past, and that past history might be why the player wants to move. Without a hearing, there’s no guarantee the disciplinary action was even justified. Given the tenets of the US Constitution, putting the NCAA in the role of executor of a sentence for an alleged crime for which there was never any trial, and perhaps not even an opportunity for the student-athlete to confront her accusers, just stinks to the high heavens, and is perhaps even worthy of a law suit by the ACLU.

(4) Who the heck cares if they had some discipline issue? As noted, it should only be the business of the prospective new coach.

(5) How many transfers do you think involve disciplinary action, anyway? Do you think there’s 10 more besides Destiny? One more? Maybe nobody besides her, in women’s basketball anyway? Could very well be the latter. I don’t know that the transfer portal has a checkbox for that. I suspect that there are so-few/none such that this sub-rule about no disciplinary action is tantamount to a special sub-rule that punishes only (or mainly) Destiny Pitts.

(6) Therefore, I think that sub-rule is totally stupid, and adds nothing of any value to the proposed new rule, and ought to be simply stricken from the proposal.

(7) I pointed out recently that in practice (if approved) it might depend on how it’s administratively implemented. Does a questionnaire go to Minnesota, and do they have to answer “was there any disciplinary action involved?” If so, maybe Minnesota just signs it “no” because they have no desire to punish her further. Or, maybe they sign it “yes” simply for fear of NCAA disciplinary action to the program for not being truthful.

(8) In summary, that whole no-disciplinary-action sub-clause is just a big mess, and was not well thought out, and they should just delete that line.

(9) Meanwhile, latest rumblings out of the NCAA suggest that although they will allow the vote on it to proceed, some of the powers within the NCAA (besides the study committee) are recommending not to approve it.

So I guess we’ll see later on this month.

Meanwhile, Destiny Pitts is ranked number two among transfer portal (regular transfer) prospects. They say she’ll be a starter wherever she goes.
Last edited: May 2, 2020
M

Clarify a few minor things (and one big thing):

- the May 20 vote would be to update guidelines that the group who approves/rejects each waiver application uses to guide their decision.

The guidelines for all other sports than I believe football, men's/women's basketball, men's hockey, and baseball (I think that's correct ... basically all the sports that make decent money for at least some major schools), they already use these guidelines now.

Meaning, if it's volleyball, softball, soccer, etc. and it's the first time an athlete is requesting a waiver for sitting out because of transferring between four-year schools, then it is automatically granted if the athlete is essentially in "good standing" (academically, and discipline wise).

- the point of the May 20 vote, then, would be to update the guides for those five sports to just bring them in line with the rest of the sports.

- that was the recommendation of the "working group" that studied this issue, as was commission by the DI board of directors, and they recommended it to be voted on in May.

(they also recommended that the DI board lift the moratorium on new transfer legislation, which they agreed with. So that means new actual legislation that governs transfers, can again be considered, and probably will as soon as Jan 2021)

- lastly, but importantly, just this week however, the DI board commented that at this time it would be inappropriate to change the guidelines. They instead recommended the transfer waiver group just be lenient in these times of cv19.

However, apparently, the board doesn't have the power to kibosh the guidelines update by themselves, as the vote for the whole DI council is still moving forward on May 20. I have no idea if this means it's unlikely to pass there, or if that is still up in the air.
B

Pitts to Texas A&M
I

A quote from Gary Blair (as suspected Destiny will graduate before joining A&M).

“Destiny [Pitts] is going to offer us a lot. She is such a great three-point shooter and has proven that in her last two and a half years at Minnesota. This is a kid that has played multiple positions from the two to the four, depending on what technique or scheme they were running. At 5-10 her versatility is what is really going to help us because she gives us the flexibility to move people around. We fell in love with her when we were watching film on her, and then when she came here on her official visit she fit in with our kids like a glove.

Academically she is a great student, and will be an asset to our program when she graduates. She is also a next level player. I am sure when she is done at A&M that we will see her playing at the next level because of her scoring ability from the outside.”
Click to expand...

Three full school years plus two summer semesters, maybe even three summer semesters if she enrolled for summer 2017. That should be plenty of time to earn an undergrad degree.

Good luck to her
S

TAMU is a bigger-time program, although with Carter declaring for the draft early, they probably won’t have realistic championship aspirations.

Finally. Congrats to her.

It is too bad how things turned out under Coach Whalen. The Gophers lineup for this coming season looks promising.
G

I wish her the best and hope to see her play in the WNBA in the future.
K

Awesome! She kept us in suspense for a while, but it sounds like she found a program where she will fit in really well and be successful. We're all happy for her.

Now if the Gophers can just schedule a non-conference game against TAMU, that would be great, since we all got a raw deal by missing out on 1.5 seasons of Destiny Pitts, so one game might be suitable compensation. And here's hoping that there's going to be a basketball season.

This sentence by the coach ...

"Academically she is a great student, and will be an asset to our program when she graduates."

... is a bit mysterious as to the exact meaning. It might mean that she will take summer school at the U and get enough credits to graduate summer term - and then it would be a Graduate Transfer, and she would be doing probably a grad school masters degree at TAMU. And that would mean a no-wait grad-transfer automatically, I presume, without any of the anticipated drama about whether or not she would get a waiver to play immediately.

On the other hand, her major is in the business school that typically uses a cohort-based program, meaning that all the key classes would be in Fall and Winter semesters, most likely. So that might be dicey - she might be able to get enough hours in summer, but what about fulfilling the major. With classes being remote right now, maybe she has worked out a deal to take the remaining major classes remotely this summer, based off videos of those classes that were taught in prior semesters and filmed. That would be ideal for her, if needed.

Hopefully that's the case. They say she will be an asset "when she graduates," so that does seem to imply that she will be coming in as a grad - although the statement is a bit unclear, so room for doubt. Anyway, best wishes to Destiny that her academics work out as well as her basketball transfer.
Last edited: May 3, 2020
I 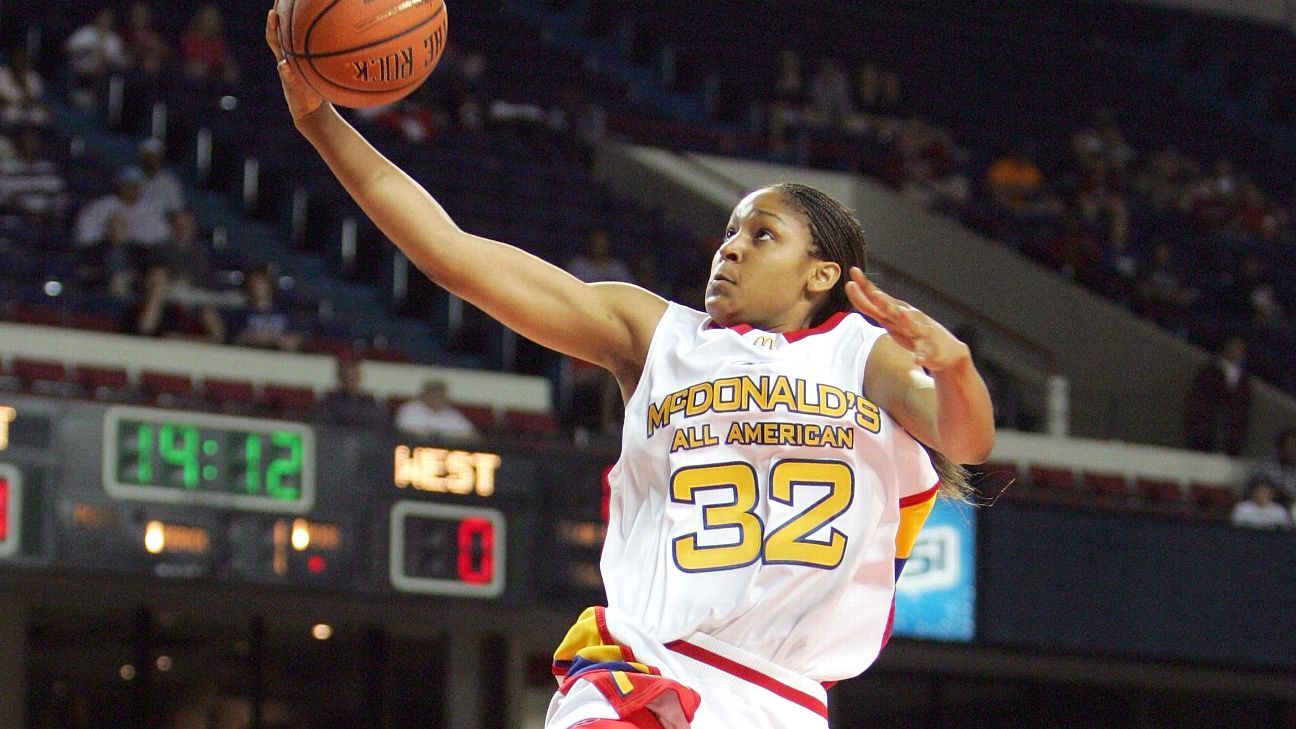 Maya Moore and Breanna Stewart are among the highly touted high school prospects who turned into WNBA stars.

ESPN's Dan Olson names some recruiting hits, misses and B-sides. One of three recruits he says he undervalued was:

Pitts was a terrific player and a good scorer at the high school level. She could drive to the rim, finish at the line, handle the ball up the floor and hit the 3-pointer. She could have struggled with quickness at the college level, but instead she reformed her game and became one of the most sought-after transfers.

Pitts signed with Minnesota and was the Big Ten Freshman of the Year in 2018. As a sophomore, she averaged 16.3 points and 4.2 rebounds. She left the program this past season and announced her transfer to Texas A&M.

She may not be the explosive player and acrobatic finisher that Chennedy Carter was for the Aggies, but Pitts is a proven scorer who can make an immediate impact in the SEC.
Click to expand...