Some gaudy records for the BIG teams. Can't wait for the "real" games to start. Will be interesting to see which teams turn out to be contenders and which teams were pretenders. Gophers are going to have to start strong if they want an NCAA tourney bid, as their schedule toward the end of the conference season gets really tough.
C

tripledouble said:
Some gaudy records for the BIG teams. Can't wait for the "real" games to start. Will be interesting to see which teams turn out to be contenders and which teams were pretenders. Gophers are going to have to start strong if they want an NCAA tourney bid, as their schedule toward the end of the conference season gets really tough.
Click to expand...

> Gophers are going to have to start strong ...

In fact (if we want to play it a bit conservative, anyway), the last 3 teams we play are tough enough that perhaps we ought to budget 3 potential losses to close out the season (yet hope to win one or more of those).

That would mean that if we want to do at least the 13-5 Big-Ten record that Warren Nolan thinks we’re capable of (to get a #21 end-of-season RPI), we kinda/sorta need to go at least 13-2 or better in the first 15 B1G games. We initially need to lead the league in order to come out where we think we should be.

Fortunately, there’s a little wiggle-room in there, since we still have the possibility to make the Big Dance with an EoS RPI worse than #21.
S

This is a surprise to me. Purdue is going to beat Ohio St in a romp.
I

Shades said:
This is a surprise to me. Purdue is going to beat Ohio St in a romp.
Click to expand...

It was a terrible outing by Ohio State. Purdue committed 23 turnovers and still won easily 66-50. Purdue's 2-3 zone and rather minimal press befuddled the Buckeyes (19 turnovers).
S 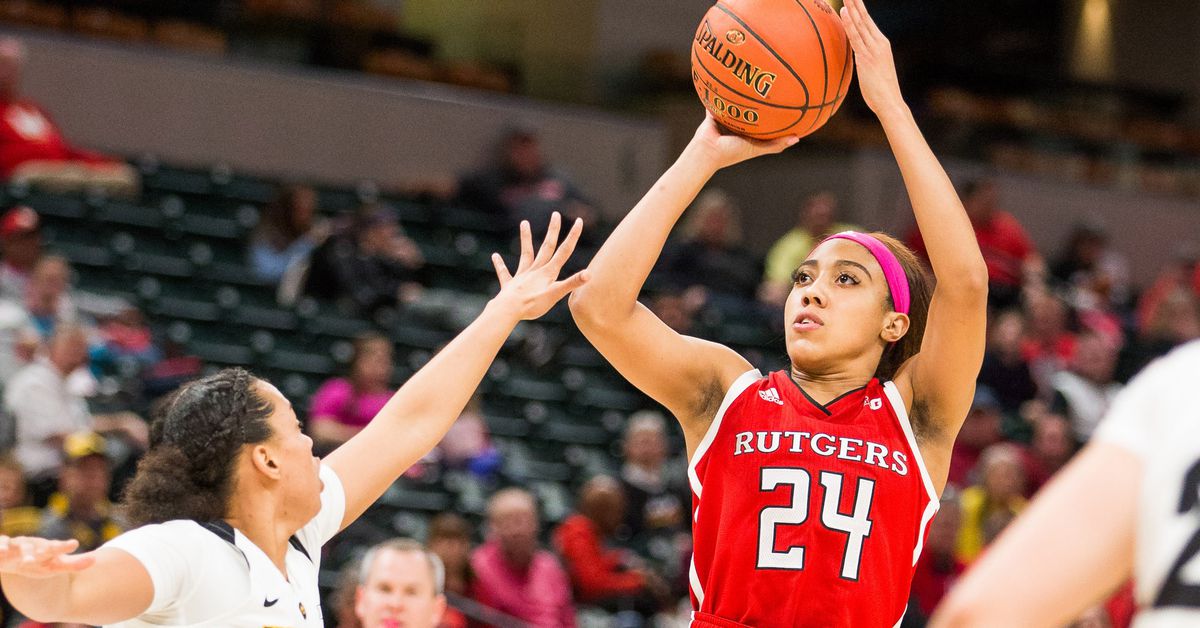 Rutgers rallied to defeat the Badgers 64-61:

After 13 days off since its last game, the Rutgers women’s basketball team were trailing 47-32 with 3:47 to play in the third quarter in Saturday’s Big Ten opener at Wisconsin. Soon after, point guard KK Sanders made a three-pointer and the Scarlet Knights outscored the Badgers 32-14 the rest of the way to stun the hosts 64-61. The Badgers dropped to 8-4 overall, while Rutgers is 11-1 and off to the best start in the 25 year tenure of C. Vivian Stringer on the banks. It’s also the best start for the program since RU began the 1990-1991 season with a record of 13-0.

Arella Guirantes missed her first seven shots of the game, but still led Rutgers with 22 points (7-24 FG), 11 rebounds, 8 assists, and 5 steals. She also scored the final four points to clinch the victory from the free throw line. Guirantes leads the Big Ten in scoring with 19.2 points per game.

Tekia Mack finished with 17 points on 7 of 12 shooting, 7 rebounds, and 3 assists. KK Sanders, who also made a jumper and a steal leading to a Zippy Broughton basket that started the comeback with a 9-2 run, finished the game with 11 points (5-12 FG), 3 rebounds, 3 steals and 2 assists.

Of note, Baylor transfer and former 5-star recruit Alexis Morris was cleared to play on Saturday after sitting out due to transfer rules. She had 2 rebounds and 2 steals after missing both shots in 11 minutes of action
Click to expand...

Maryland beats Michigan. Charles with 23 points and 11 rebounds (as a guard). Dilk with 18 for the Wolverines, who interestingly started 3 posts and played 5 posts in total who collectively scored 33 points and 22 rebounds in a total post playing time of 113 minutes. Maryland started 4 guards but post Jones came off the bench for 26 minutes to augment Austin’s 23 minutes. In total there was 61 minutes of post playing time by the Terps. However, it should be noted that Maryland only has 4 guards under 6 feet with 4 guards over 6 feet, and Maryland outrebounded Michigan 43-35. (In any event, note that 40 minutes of playing time shared among Gopher posts is probably not going to cut it against either Maryland or Michigan.)
S

Charles is being played like Pitts, out of position at the 4. A big reason for that is Charles isn’t proficient at the three, and Frese doesn’t want to take away from the three point shooting. That means a starter-worthy post player in Jones is coming off the bench. I’m not sure it’s the best move by Frese. They have lost a couple games to less talented teams, but we’ll see how it goes.
T

I watched Indiana's win over MSU. Looks like the Hoosiers have a really solid club and, after Maryland, they might be the second best team in the league. They have a well-rounded team, including three young post players who are already contributing a lot. I didn't look to see what the attendance was for that game, but the announcer said they thought the crowd in Bloomington was over 3000. I remember years that they would draw 500 people for a Hoosier home game. Nice to see that interest there has grown substantially.
K

Coach Moren has really turned the Hoosiers around, this year they’re the best D 1 WBB program surpassing Purdue and Notre Dame, although I suspectNotre Dame is a temporary dip. I believe Versyp is coaching for her career, can’t imagine that the fact that the Hoosiers have pass the Boilermakers is sitting well with their fans
I

In OT, Michigan State (1-1) defeated Nebraska (1-1) in East Lansing 78-70. It was a grindy, long game in which the Spartans trailed by 10 in the second half. McCutcheon didn't get a field goal until late in the 3rd quarter. Suzie Merchant also picked up a technical near the end of the third. Foul shooting was terrible for both teams.

The Spartans played without Shay Colley (Knee) and Victoria Gaines (who knows).
T

Well, maybe we shouldn't give the conference crown to Maryland yet. Northwestern trounces the Terps in Evanston. Cats off to an 11-1 start.
C

tripledouble said:
Well, maybe we shouldn't give the conference crown to Maryland yet. Northwestern trounces the Terps in Evanston. Cats off to an 11-1 start.
Click to expand...

Yeah, was a bit shocked when I saw the NW/Maryland half-time score on the scoreboard. Final score was 81-58. Mikesell misses all her three attempts until the last one, when it was too late. For those who like to see Maryland suffer once in a while, some highlights are at

Ignatius L Hoops said:
At the half the Badgers lead Iowa 50-35
Click to expand...

Michigan State knocks off Rutgers on the road. Now Maryland leading Indiana by 20 at home with 7 minutes to go in the 4th.
S

Wisconsin is up on Nebraska in the fourth quarter. Maybe Wisconsin has turned some kind of corner?
I

Shades said:
Wisconsin is up on Nebraska in the fourth quarter. Maybe Wisconsin has turned some kind of corner?
Click to expand...

They've been dominating Nebraska in the paint; although they had a 9-0 run late in the third fueled by Gilreath's back to back threes. The Huskers are coming back.
S

Ignatius L Hoops said:
They've been dominating Nebraska in the paint; although they had a 9-0 run late in the third fueled by Gilreath's back to back threes. The Huskers are coming back.
Click to expand...

I guess good teams know how to win.
M

Wisconsin's issue seems to be a lack of a go to player down the stretch, they arent gifted with athleticism and when defenses clamp down late, they had a hard time executing. Lewis is good but undersized in the post against NE.
AGainst MN WI was able to go inside against our smaller players late or get O rebounds, the way to combat that would be to put a lot of pressure on the ball to make those passes inside harder and we just didnt do that. Beat Indiana and the in/out conversation will start up again. Need a couple signature wins down the stretch.
I

At the half, Northwestern leads Maryland in College Park 30-27. The Wildcats withstood a strong Terp start. Maryland lost Shakira Austin with an injury to her left ankle mid-way through the first quarter. She came down on Abbie Wolfs foot. Austin is on the bench with an ice bag on her ankle and will not return.
I

Maryland put together a couple of second half runs. The second of which in the fourth quarter went unanswered and gave them the separation necessary to defeat Northwestern 70-51.
I

Iowa stormed back with a 28-9 fourth quarter and defeated Michigan State 74-57. Czinano left the game with an ankle injury in the third quarter; but guard Mckenna Warnock stepped up with 22 points and 10 rebounds.
S

Wisconsin up 7 on Indiana with about 8 min left
S

Shades said:
Wisconsin up 7 on Indiana with about 8 min left
Click to expand...

Thanks partly to Berger, who the Gophers let go 10-13 against themselves, being 0-11 with 0 points so far.
S

IND destroys WIS 14-4 in OT
Good teams know how to win the tough games.
I

Iowa's Monika Czinano sat out the Penn State (1-9) victory as she recovers from an ankle injury. She was replaced by McKenna Warnock who scored 16 points and grabbed 7 rebounds. The Hawkeyes (9-1) roll on with a 77-66 win at State College.
You must log in or register to reply here.
Share:
Facebook Twitter Reddit Pinterest Tumblr WhatsApp Email Link
Top Bottom